Grief feels a lot like “the middle.” I keep being reminded of what I wrote about middle ground on the “about” page (here) – I wrote “it is sometimes the ground where nothing grows. The wilderness over which the Holy Spirit howls.” Grief is also a waiting time. Everything feels ‘on hold’, even the things that continue because they must.

Last Tuesday my partner Hannelie and I went to the beach. Hannelie makes Land Art and we were hoping to catch the low tide at Seaham to make something before the waves started to come back in. Low tide was around 2 o clock, but we arrived at noon and waited for the waves to slowly reveal the rock pools and the stretch of golden sand.

The tide was already turning by the time we got started building a structure of driftwood dug right into the sand. It was pretty stable, with rocks piled against the bases of the pieces of wood to stop them falling. The tide was coming in fast and I grabbed my camera to capture it.

Things happened pretty quickly after I caught this image. The tide raced in over the heavy stones and eroded the sand. Hannelie was still adding things to the structure when one of the bigger pieces of wood fell. She caught it but there was no way to fight against the tide and the whole thing collapsed, the stones washed into a new pattern by the waves, the driftwood floating out to sea. 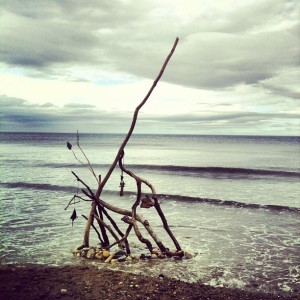 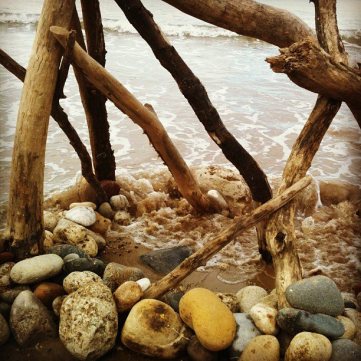 Exhilerated by the experience, we raced into the sea to dive beneath the freezing waves, our breath squeezed out of us by the sudden jolt of the cold water and pounding of our hearts.
We stayed on the beach for a while drying off and ate the food we had brought with us while most people left and the kittywakes started wheeling and diving into the water to catch sand eels.

We came home to the news that two of Hannelie’s brothers had been in a serious car crash and that her sister-in-law and ten year old niece, travelling in the car too, had died.

Remembering that day which seems so long ago but was only just over a week ago, I know that we arrived on the beach as the accident happened. We made something beautiful and the waves took it away so quickly, before we had had the sense of “finishing” it. I guess I don’t need to make the obvious comparison, but it is there in my mind. I am glad that we were on the beach that day because it seems to make sense somehow in the middle of all the senselessness.

Grief hit like that cold cold water and will leave us breathless for a while. The tide is going back out and I know we will be called to get up and go out there again to make new things. Meanwhile there is the middle ground, the waiting time.

6 thoughts on “Grief and Waiting”

Thoughts from the Middle

What's on your mind?

Tweets from the Middle